When word got out that local snowmobilers Doug Weeks and Nick Luna were lost in a Plumas County blizzard in March, friends and family began making plans. Word went out on social media and friends, acquaintances and fellow lovers of the sport acted quickly.

Luna’s brother Nathan, sister Tisha and family friends put out the word by phone and social media that help was needed. Ben and Lisa Bowater immediately headed with sleds and gear from Oregon and basically spearheaded the operation, according to everyone I interviewed. A time was set for all who could meet at Gold Lake parking lot, where Doug’s truck had been found.

Over a dozen sleds showed up to aid in the search. Colin Mc Neil (17) of Lake Almanor who aided in the rescue effort said Search and Rescue had warned them that even the best sleds were getting stuck. That proved to be true as they all tried the snow to see if they could make it. They could not. Mikey Majors, (16) of Westwood, who was also on scene said, “the snow was overwhelming, a complete white-out.” For that reason Search and Rescue had not yet been sent out by the local Sheri .

Lisa had already arranged for accommodations two miles from the Gold Lake parking lot. Joanna Hahn, I understood to be the owner of the home and was an awesome hostess. She allowed the sleds, family and friends to gather, and according to Twila, Luna’s wife, literally take over the property.
In the end, I was told, she did not even charge for the rental.

Calvin cut tracks from 11 am that day until 2:00 am, allowing the snowmobilers access. It was the only way they could ride and search, according to Mikey and Colin.

Day two of the rescue effort was met with more blizzard conditions. The guys said they spent most of the day leap-frogging up the hill. When I asked what that meant, they said you could only go a short way before getting stuck so they would follow in each others tracks, (when they weren’t digging out sleds that got stuck).

They always rode in groups and they rode in shifts, giving them a chance
to go back to the house to dry out and warm up for a while. Safety was key in this operation and riders were equipped with a shovel, BCA Link radio and safety gear. Snowshoes were provided free of charge by Tahoe Dave’s out of Truckee.

At the end of day two, the riders hovered over a map spread across the dining room table. The family and friends who stayed in the cabin by day had been working on cell phone ping graphs provided to them by Search & Rescue. They were sending the data to a relative far away and he was translating the data to GPS coordinates. They marked every ping they had on the map and narrowed the search to a drainage ditch. However, the drainage was ten miles long. The stranded pair had been able to make a call in the first night, so it was known they were by a creek, but thought they would be okay after digging out a sled in the morning. They had survival gear with them so they built a fire, built some lean-to’s and got some sleep. The wind ended up destroying the shelter and sleep was short. They got the sleds going and rode away to only end up with a break-down.

So, rescuers were armed with some knowledge of their last known whereabouts. Those who had rode Gold Lake with him in the past thought they might know where to start. The group planned their morning shifts and made a plan to start at the middle of the drainage, some going up to search, with others going downhill. 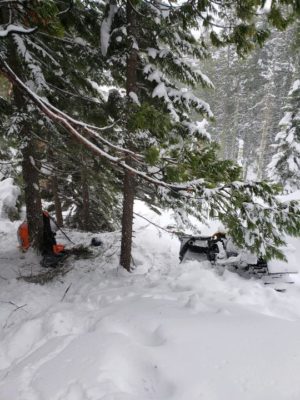 Day three for rescuers meant the pair had spent their third night in the snow. They got through the first two nights fine; they had a fire, even though on the second night, they had to light the one working snowmobile on re to keep warm. The third night they dug a cave in the snow where they woke up cold and wet. At this point they knew they were in trouble soon if they did not get help.

Luna decided to try and summon the snowmobilers they had been hearing in the distance for days and began hiking out, using his helmet in one hand and backpack in the other to gain traction in the snow. Unfortunately, unable to see beyond the snow, he fell in the creek. It wasn’t long before he collapsed.

The morning’s shift of riders was off . Colin and Lisa rode double, Mikey and Tyler Weideman (21), also a driving force in the rescue, were on another sled with Nathan and another unknown name on the third sled. They set out to a spot in the middle of the drainage, that they had determined to be their best bet. They got o their sleds and all were putting on snowshoes. Tyler hollars at the group, “Quiet, I heard something.” Sure enough, another cry came from the woods. Tyler lept and Mikey and Colin followed. Luna said, “It was so cute. I could see the three young guys running, tumbling, getting up and running again. The best thing ever! 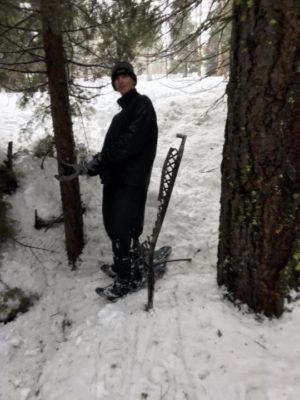 Luna asked for a drink; Mikey gave him his Yeti and asked, “Where’s Diggy? (a nickname they all use for Doug). “Follow my tracks,” he said, “but watch out for the river.” Mikey and Colin rushed over the tracks and soon saw the place where Luna had fallen in the river. They drew closer to the water and could see Doug. They yelled his name repeatedly as they headed toward the drainage but got no answer.

The two rushed through knee-deep, ice cold water making their way to Doug. Colin removed his wet beanie and replaced it with his own dry one as Mikey struggled to put dry gloves on him. Mikey tried to call 911 but had no service. Colin radioed Lisa who called Luna’s wife Twila and said, “We found them! Get some medics up here.”

Meanwhile, Tyler had made his way to stay with Weeks while the guys went to summon snowmobilers they heard in the distance for help. Snowmobiles from the Gold Lakes area were out also trying to help find the guys. Colin said they packed down the snow so help could get in and they were able to get the attention of some help. Mikey said, “A really, big, really strong guy picked up Diggy, put him over his shoulder and carried him out.” Colin added that it was about a quarter to half mile hike and it was no easy one. Each step went deep. The unknown man was a hero in their eyes. He was one of many heroes. He then placed Weeks on his snowmobile and rode him to the Snow Cat that Search and Rescue now had on scene. The Snow Cat took him to the ambulance area in the parking lot, where Luna was also taken. All of the rescuers assisted as Search and Rescue put him in what the guys called a giant plastic bag. He was warmed up, wrapped up and drug up the hill, on a sled drug by all.

All medical reports showed the pair had little time left to make it out alive. They are so grateful to their dedicated family and friends, to every snowmobiler who searched, and to all who helped in any way.

Both wanted to convey a message to others about not getting complacent when you play in the woods. Know the weather. Get out early. Bring extra survival gear, a radio, and now, they plan to carry lightweight snowshoes on board their sleds.

During my interviews I had to ask Mikey and Colin how their parents felt about them going. Both responded immediately, “They said no.” The boys persisted by packing late that night after their parents were asleep. When they were discovered trying to head out very early that morning, they were able to convince one dad that they were doing the right thing. Reluctantly, he let them go and contacted the other parents, who also understood how determined these guys were to help their fellow snowmobilers. When I asked them about the third day and what kept them going, Colin quickly responded, “It was the THIRD day!” Mikey said, “It was the faces on the people back at the house, the family.” 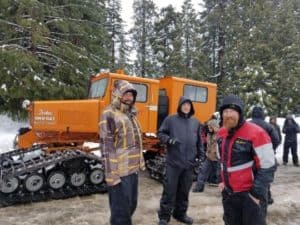 “People we didn’t even know cared enough to come out and help. I can’t say how grateful I am,” said Luna of the rescue effort. Likewise, Weeks expressed sincere thanks to everyone that helped.