“On any given day in northeastern California, if you enjoy the challenge of a dusty back road pockmarked by ruts and potholes, you might be rewarded with the beautiful sight of wild horses and burros.

I have photographed these horses and burros many times, but there is no more thrilling time than the spring when they are giving birth to their colts.

The wild horses have a very distinct and strong family unit, and within a  relatively small geographical area you will find many sub-units.  Typically, there is a main herd with a very strong stud, his harem, colts, and many challenging males who watch from the sidelines and occasionally challenge the strongest male in the group; and within a short distance you may find smaller herds with several younger males, usually one being the “up and coming stud” of his group accompanied by a couple of females and their colts. 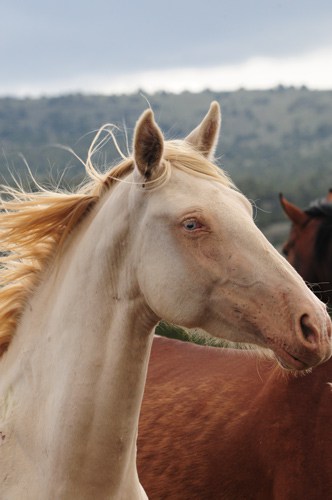 I have found, if you approach in a slow and un-threating way, you may be able to get within 50 or 100 yards to observe, but beware, they can become defensive and aggressive!  Keep your distance, these are wild animals! 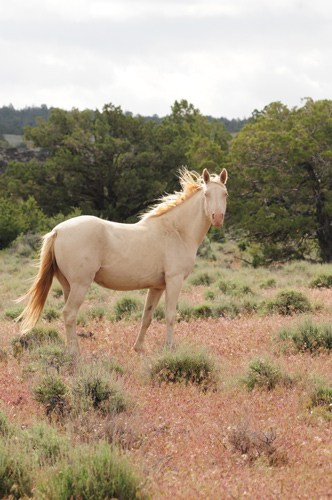 The subject of wild horses is very controversial and people have strong opinions on both sides of the argument.  Many will argue that they are wild and we should allow the natural adaption of nature to control the herd and their sizes, while many argue that the horses are taking more than their fair share of the natural resources, food and water, which compete with other wild herding animals such as deer and antelope, not to mention the cattle on private and tribal lands.

The Bureau of Land Management (BLM) is actively involved in the management of these herds with several approaches.  They do organize gathering, sheltering, and attempting to adopt the wild horses and burros, and they also participate in a fertility attempt.

There are also active groups who advocate for allowing the horses to remain wild, and be allowed to remain on the land to live and forage for themselves.

I am of the opinion that while these horses are called “wild” they are actually feral horses who have multi-generational herds which most would consider wild at this point.  Unfortunately, I also observed horses who had worn and broken harnesses on, and it was apparent that they had been set lose or abandoned to fend for themselves.

For the most part, all of these horses were healthy and free, and appeared to be making their way in the wild!” 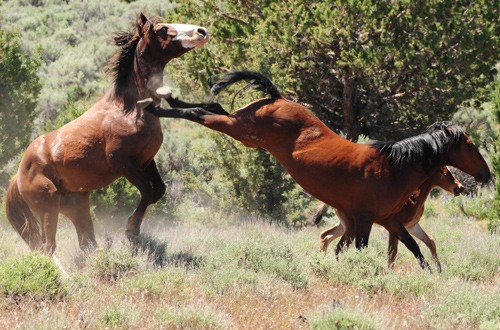 By Melissa Wynn and Photographs by Jan Ramelli

Several herds of wild hoses and burros occupy the northeastern slope of the Sierra Nevada and the west edge of the Great Basin in northwestern Nevada.  Overseen by the Bureau of Land Management (BLM), these equestrian groups are divided by their home range known as a Herd Management Area (HMA). Each HMA is capable of sustaining a determined equestrian population that consists of one or more herds each consisting of a dominant male called a stallion, his harem of mares and their young.

Males fight for control of their harem and the right to breed and as stallions age they are challenged, defeated and replaced by  younger studs. Young males without herds wander on their own or run together in small bands of bachelors.

Mother mares are very protective of their young and even the lead stallion should mind his manners. Too close and he might find himself with two hooves to the throat like the careless father pictured on the next page.

Each HMA population is managed in a number of ways including birth control and sometimes gathering of the young and placement for adoption.

The Buckhorn HMA spreads across parts of both Lassen County California and Washoe County Nevada and spans 76,590 acres of  brush and grasslands 40 miles southwest of Cedarville, California. This high elevation desert landscape is home to 60-85 mostly solid and bay colored horses believed to descend from U.S. Calvary remounts that escaped during the years surrounding World War I mixed with some Spanish and ranch diluted stock. 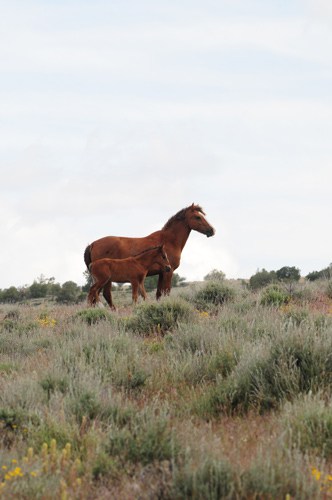 About 30 miles southeast of Cedarville another group of 50-75 descending from the same U.S. Calvary and Spanish ancestors thunder across another 73,422 acres of high sierra dessert. These large and strong specimens also show the tell-tale signs of Morgan, Thoroughbred and Quarter Horse ancestry preferred when breeding the working horses of World War I. Shining black, rich chestnut and  bay colored beauties live the wild life on this ground dubbed the Coppersmith HMA.

The Fort Sage HMA is the smallest and therefore hosts a smaller group of 25-30 majestic mares, stallions and young that most likely began decades ago from runaway ranch stock. Coat color varies in this area that keeps horses wild in the west on 15,967 brush covered acres just east of Doyle,California.

The smallest population of 10-20 wild mustangs roam the hills near the town of Ravendale, California on  the 32,137 acres called the New Ravendale HMA. This interesting group of ranch stock ancestry are mostly solid black or chestnut and have some draft horse characteristics that tell of their workhorse history.

At 758,128 sprawling acres the Twin Peaks HMA is by far the largest and home to the herd so beautifully photographed

by Jan Ramelli and pictured here. Capable of sustaining over 700 horses and more than 100 burros this vast brush land is home to horses of many backgrounds and colors including splotchy pintos, appaloosas with their distinctive spotted rump and at least one pure white, blue-eyed beauty. Since horses and burros both freely roam and breed here Twin Peaks is one of very few HMAs that have mules. Mules are the result when a male burro breeds with a female horse. Mules can be male or female but due to an odd number of chromosomes they are sterile and cannot reproduce. The burros are believed to originate from historic sheep grazing operations of these parts of Lassen County California and Washoe County Nevada 25 miles northeast of Susanville.

Several of the HMAs mentioned here border one another and all except Fort Sage are located, at least in part, northeast of Susanville. If you have a desire to see wild horses run free and appreciate the unique beauty of the Great Basin take a ride on the back roads through that area and keep your eyes peeled.

Drop in at the BLM office in Susanville at 2550 Riverside Drive for directions and maps of the BLM lands open to the horses and the public that wants to see them. A full listing of HMAs throughout the USA, maps by state and a full description of each HMA is available online at www.blm.gov along with listings of upcoming gathers and adoption opportunities.

Gatherings and adoptions from the mentioned HMAs and 22 in total are coordinated through the Litchfield Corrals located 21 miles east of Susanville on US Highway 395 where gathered animals are prepped for adoption. The corrals are open Monday-Friday from 7am-4pm and can be reached by phone at 530-254-6575 or find them on Facebook for the latest news.